Tagline : The Final Challenge! Give it everything you have! Real prizes at stake!

Story:
Pinkerton thought that it was high time to get some new explorers in the mix. ‘’To make new discoveries you would need fresh new minds after all’’ he would say. So for a while Pinkerton has advertised the International Society in different social circles, trying to spread the word to all the corners of the earth. Today he would see the fruits of those labours. A presentation would be held by the four most experienced captains in the society to introduce the new recruits to a life of exploring. After the sign up and registration process handled by lady Vaduva the new recruits are told to wait in the lecture hall until the presentation begins. Anna, Harry, Victor and Yvonne are waiting near the entrance of the hall discussing the new recruits without drawing to much attention.
‘’It sure is an odd bunch of people that want to become explorers.’’ Anna says looking at the people that walk past her. Victor looks at them with more excitement.
‘’People’s weird quirks can be greatly beneficial on expeditions. We should know that better than anyone.’’ He says.
‘’Honestly how did some of these people even qualify?’’ Anna asks in disbelief. Yvonne turns towards Anna.
‘’What do you mean exactly?’’ she asks. Anna scans the people sitting in the hall and points at a man sitting in the middle.
‘’I mean just look at that guy! The only thing he has going for him are his looks! If I remember correctly Vaduva said he was from Spain. I really just think his appearance is what made him stand out.’’ She says.
‘’The same could be said about Maria as well yet she is also very successful. How do you explain that?’’ Yvonne asks her. Harry buds in.
‘’Well that is because Maria has….euhm you know what I better not mention that.’’ Harry says. Yvonne points towards a man with a scraggy beard, an admiral hat and a large pipe.
‘’Just look at that man. He must be one of the oldest people here. Shouldn’t he let this exploring ship sail by?’’ She asks.
‘’Don’t let Agatha hear what you just said. She will give you a rant about how the elderly are the best explorers.’’ Victor says. Harry and Anna nod.
‘’Correct, and then give everyone else a lecture about it too just because she feels like it.’’ Anna continues. Harry’s eyes turn to a young woman sitting at the back.
‘’Speaking of the opposite, look at that girl over!’’ he says and nudges Victor in the side. ‘’How about it? Think I can make a move?’’ he continues. Victor looks at her.
‘’If you do choose your words carefully. If she doesn’t like you, she has multiple ways to hurt. I see a knife, an axe and even a quiver so a bow shouldn’t be far. And who knows perhaps she can hurt you emotionally as well.’’ Victor says.
‘’Before you break his little heart even more I suggest we start the presentation.’’ Yvonne says. Everyone agrees and they walk on the stage.

As the explorers walk up the stage the entire room goes silent. They position themselves next to each other. Behind them is a large object covered up by blankets.
‘’Welcome explorers to be! We want to thank you for coming here to join our wondrous society based on exploration and discovery!’’ Yvonne says.
‘’Today we will introduce you to the basics of exploring.’’ Harry says.
‘’Exploration is all about going to the most remote and mysterious places in the world, looking for riches, fame and knowledge.’’ Victor says. A man in the stands up and asks a question.
‘’Can’t you do those things without going to all these remote locations?’’
Anna tries to answer, but Yvonne is interrupts her.

‘’You can become a renowned explorer without even leaving the society. Just look at Anna over here. A prime example.’’ Yvonne says. Anna turns towards Yvonne.
‘’What do you mean? I have discovered plenty of new and exciting things in the lab not to long ago.’’ She says.
‘’Yes, in the lab! That wasn’t any proper exploring work. Honestly, I’m surprised Pinkerton sees you as my equal.’’ Yvonne says while turning away from Anna. Anna frowns angrily.
‘’You and me! Parking lot! 3’o clock!’’ she says angrily.
‘’But dear that is in five minutes’’ she says. Anna grabs her weapon.
‘’I am fully aware of that.’’ She says. Yvonne has her eyes half closed.
‘’So be it.’’ She says slowly. Both Anna and Yvonne leave from opposite sides of the stage. There is an awkward silence for a moment.
‘’Does this occur a lot between those two?’’ a new explorer asks.
‘’More often than you would think.’’ Harry says.
‘’It is just a… friendly rivalry.’’ Victor answers. Harry starts to laugh.
‘’There is nothing friendly between those twoaaaauuuw.’’ He says but gets stepped on the ankle by Victor.

As Harry tends to his foot Victor clears his throat.
‘’As my colleagues were mentioning, if you do something extraordinary on your journey that gets the attention or renown from the public in one way or another you should be a winner.’’ Victor says. A man in a blue coat and wearing a bowtie raises his hand.
‘’So, for example, defeating an armed opponent with just words is considered ‘extraordinary’?’’ the man asks. Victor Smiles and shakes his head.
‘’That is what we do all the time. You will have to think bigger!’’
The man thinks for a moment.
‘’Defeating a vicious animal with just words?’’ he asks.
‘’No bigger!’’ Victor says.
‘’Defeating an evil emperor with words?’’ someone else says.
‘’No. Think bigger.’’ Victor says and raises his arms.
‘’Defeating a ghost with words?’’ another one asks.
‘’EVEN BIGGER!’’ Victor says as he jumps in the air. It is silent for a few seconds. Victor stands on the stage shaking from excitement.
‘’……..is a god an option?’’ a man says. Victor points at the man and smiles.
‘’YES! That is the answer that I wanted to hear! Do not think about boundaries!’’ he says. The entire room starts talking. Victor is unsure if it is excitement or confusion.
‘’Everyone stay quiet please. We have it all written down on this large board. Harry can you reveal it please?’’ Victor says.
Harry stumbles towards the large curtain covering the suggestions. With one strong pull he removes the curtain, showing the challenges to everyone.


Rules:
Scoring:
Your Score is your Renown, medal points are tripled
* Number of medal points awarded when playing on Classic Difficulty. Easy and Normal give less, according to these rules.
Gold and Platinum medals may only be achieved without losing, though Silver and Bronze are still possible to get with just the Record sheet for that trip.
** The platinum medal is extraordinary and can only be achieved on Classic or Impossible difficulty without losing. It doesn't increase Medal Points further than a Gold medal, but we will track how many you have.

The Award Ceremony
There are fifteen different awards, and the winner of each will get a special prize. Your entry is eligible for all fifteen awards at the same time, unless it doesn't meet the requirements of that specific award, so there is no need to state which awards you're entering for. You can only win One Prize! If the same player is in first place for multiple award categories, they win the first one in numerical order (the award with the lowest number) and becomes ineligible to win all later ones. This means the later awards will have less competition, so dont give up if you're not the best at getting renown.

So what can you actually win? This beautiful wooden sculpture. Its 7 cm high with a 5cm diameter base, or 3 by 2 in inches 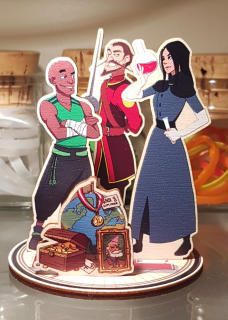 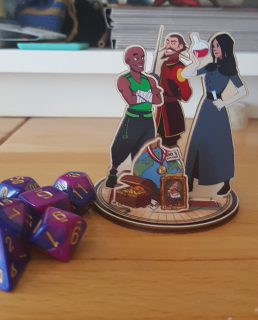 Now for all the Award Categories, some are very simple and some have very specific requirements. You'll be entered into all categories you meet the requirements for, whether you focus on doing well in a specific category or try to spread your chances on as many as possible is up to you. Good luck to all

Notes:
* For #10, X Rank was a special rank for certain treasures which has been discontinued since MtE, the following treasures used to be X rank and are the treasures needed for this Award: Roche's Logbook, Woolly Feather, Ra Statue, Thoth Statue, Shrunken Head, Baba Yaga's Mortar and Pestle, Yeti Photo
** For #14, the following are Gargoyle Treasures: Skull of Cernunnos, Will-o'-the-wisp, Executioner's Axe, Crown of Thorns, Freyja's Spear, Pumpkin King
***For #14, the following are considered Ghost bosses: The Necromancer, Captain Roche, Lady of the Graves, Muhdjid the Ifrit

Rules Recap for the awards
How to participate
You can participate by posting a screenshot of the endscreen of your run, either here or on the Steam forums, in addition to any other screenshots for specific categories. You can also write a story or do both.

Stories
Write a story. You can use the Challenge theme as an inspiration by looking at the constraints. Find other stories in the Fan Story directory or by looking at previous challenges.
Post your story in a new topic in these forums.
Also link to it to this thread with a comment: Include the first paragraph/few lines of your story in the post here to show readers what your story is about.

Highscores
Play the game according to the challenge rules and in Adventure mode.
Post in this topic a screenshot of your Win Screen*, right after the ceremony or your Leaderboard record.* Also include a text version of your score with the submission to allow for error checking.
Submit by 12:00 noon CET, 19/03/2021 (Or 03/19/2021 for those using MM/DD/YY)
(click here for your local time equivalent )
NOTE: Only one score will be accepted - only one submission for each player please. If you wish to enter a new score, please edit your initial entry and make it clear which score you are submitting, and add the word "EditGreenlight" to the entry so we can see immediately when the result needs updating.
*If you forget to screenshot the Win screen, you can also enter with a screenshot of your Leaderboards: Go to Main Menu > Leaderboards > Local > click the entry that matches your submission game > screenshot those details.

Game Version
Must be Build 522 or later

Story ideas:Who are some of the new recruits not mentioned in the story? How many new recruits are there? Who won the epic parking lot duel?