​
Hello young gods! It is time to face off against one another in the first Godhood Community Contest!
You can compete in 2 different contests: the Supremacy Contest and the Grandiosity Contest! Read details below!

To apply: After winning the game, multiply your

Worshippers by your remaining

Crystal Skulls.
Post the words "I vie for Supremacy!", your calculated score, and a screenshot of your win-screen, on this thread!

To apply: Complete a play-through by either winning or losing. Get as many Religious Developments as you can!
Post the words "I vie for Grandiosity!", a screenshot of your win-screen, and:
- Your God's Name & Appearance, Religion's Name, and Worshipper's Name
- A short story describing your religion's history and beliefs! Bonus points for using your Religious Developments to inform your story!

May the most supreme, grandiose god win!​
S

I vie for Grandiosity! 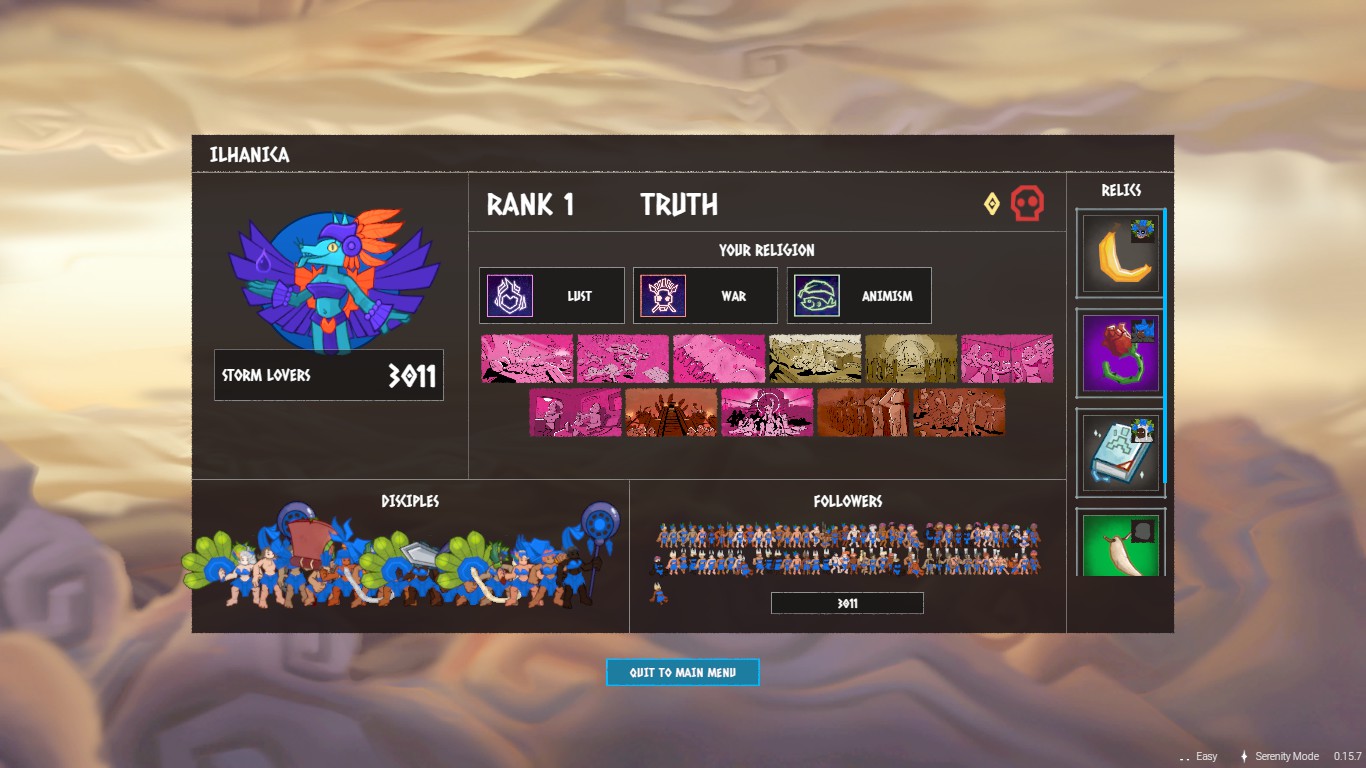 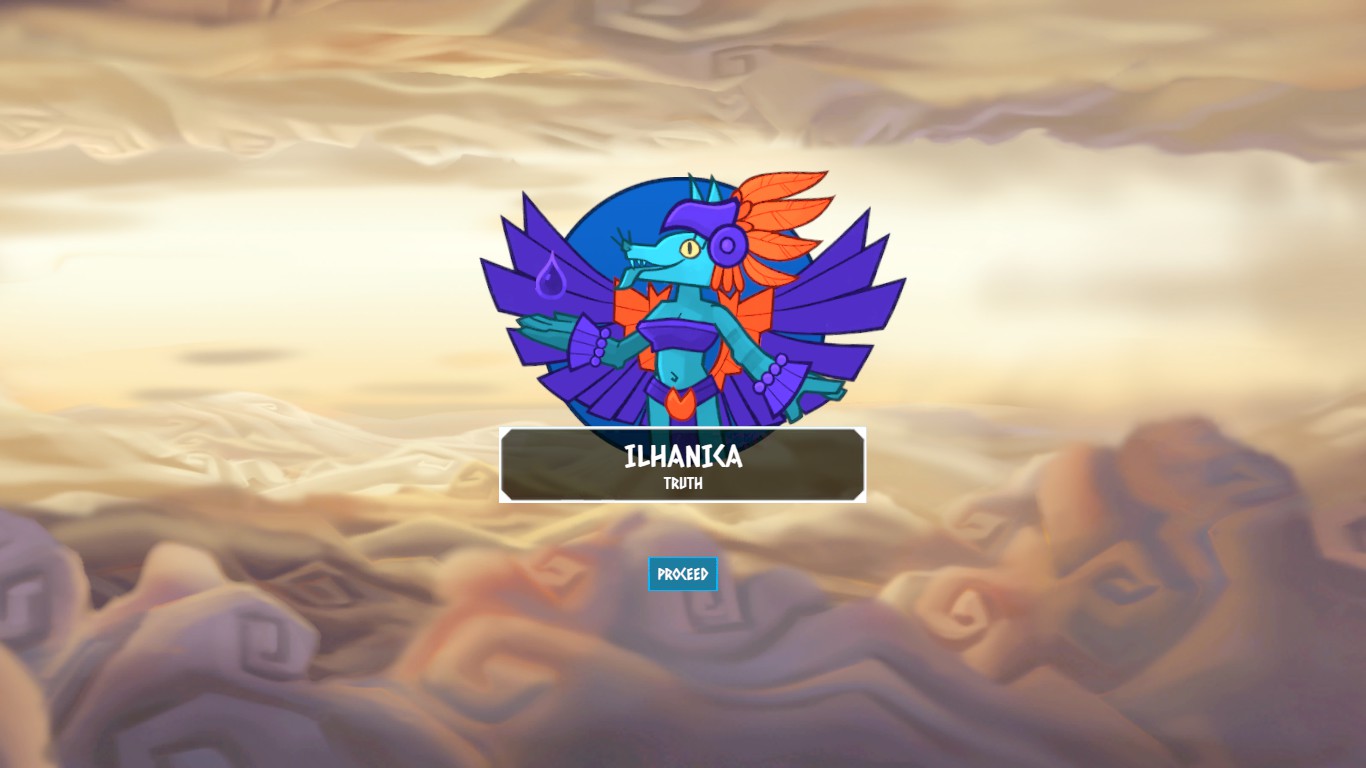 Goddess Name: Ilhanica
Appearance: Appears as a blue furred beautiful woman with a dog's head and purple wings. She is often dressed scantily, wearing only a dark loincloth and vest, and and wearing a purple bird-shaped helmet with orange feathers in it.

History: Long ago, Ilhanica began as a spirit of pleasure and winds. It was at this time that she desired to become one of the gods. She appeared to a young woman named Anci who would become Ilhanica's first prophet of Sky Passion to teach others to celebrate in the bodily pleasures of the world. For three days and three nights, Ilhanica taught the young Anci the powers, joys, and pleasures of Lust. When the elders of the Old City refused to believe in the ways of Sky Passion, they cast out Anci and the few followers of Ilhancia who would become know as Storm Lovers. Anci prophesied that Ilhancia's people would one day return. Upon finding a new holy land for her people, Ilhancia began to teach her Storm Lovers, showing them that their bodies were temples and how to love one another by teaching how to bring forth endless pleasure not just from each other but themselves as well. As her people grew and converted others, Ilhancia and her prophet Anci showed the Storm Lovers that lust and pleasure were natural parts of themselves, helping them to release and understand their primal desires. Originally being a nature spirit herself, Ilhancia thought it would be best to teach her people the importance of living in harmony with nature, showing them the tenets of Animism. It was no surprise that the Storm Lovers saw the dog as being sacred to Ilhancia, given the fact that their beautiful and seductive goddess had the head of a dog.

As time went by, Ilhancia assisted her children in developing their faith in her and themselves, namely how to reveal in ecstasy and hedonism when a young Storm Lover comes of age. The people would have grand parties with singing, dancing, craft shows, and acts of pleasures, believing that song, dance, and the arts would create both joy and pleasure as the goddess had a soft spot for such things. The goddess herself would sometimes join her Storm Lovers in this hedonistic merrymaking, and it wasn't uncommon for nature spirits to participate in the fun as well. Eventually, the people wrote a book, much of which was written by Anci herself along with several other disciples, on the pleasures of the body and soul that would please Ilhancia, calling it the Big Book of Bodily Bliss. Soon, the prophecy of Sky Passion's return to the Old City came true, and Anci lead the Storm Lovers in defeating the Elders in a fierce Sacrament. Anci and some say Ilhancia herself, lead a grand celebration of lovemaking, hedonism, and fun as all within the Old City, including the Elders, join in, showing that soon the ways of pleasurable and joyous lustful bliss was the true path for all to take. The Storm Lovers began building great statues and temples, not to mention beautiful works of art, in honor of their goddess. And there was no doubt that she was pleased.

Upon expanding beyond the Old City and their original homeland, Ilhancia began to become rowdy and wild. Even Anci herself was unsure what to make of it, but it seemed that Ilhancia's victory in the Old City had empowered the goddess, granting her the power of War, which she then commanded that her children follow as well. The Storm Lovers of Sky Passion embraced this new commandment. However, Ilhancia chose to lead the Storm Lovers down the path of valor, not savagery, teaching them to look at the courage and bravery of the sacred canines as noble examples.

Sadly, a great tragedy befell the followers of Sky Passion: Anci, First Prophet of Sky Passion, Beloved of Ilhancia, passed away in her sleep at the age of 67. Even though she had grown old and her hair had turned to a silvery gray, she still looked beautiful the day she had made love to Ilhancia. As the Storm Lovers and their faithful canine companions howled a mournful chorus, the goddess Ilhancia appeared in a soft breeze, joining the sorrowful howling. She kissed her prophet's forehead and took Anci's body with her so that the two would always be together. It soon came to pass that the Storm Lovers knew that while they may love one another and made love with one another, their bodies, hearts, and souls would always belong to their very first love, Ilhancia.

Soon, the day came when the other gods tested Ilhancia and her children in a final Sacrament. Moments before this occurred, Ilhancia called forth her children and before their eyes, their goddess transformed from a nature spirit of lust into a valiant goddess of pleasure. With their goddess's newfound power the Storm Lovers of Sky Passion went forth to the final Sacrament. The Storm Lovers sacrificed their final Crystal Skull. This was it: if they failed, then Ilhancia would be cast down by the gods, but if they succeeded then their goddess would ascend to be with the other gods.

The Story of Ilhancia's Ascension does change a bit from speaker to speaker (and varies a great deal if the speaker is drunk on pleasure and wine), but the story always ends with Sky Passion succeeding in the Last Sacrament and her Storm Lovers looking up towards the sky, with tears of joy running down their faces, as their beloved, glorious goddess of pleasure became a true deity that day.
Last edited: Nov 1, 2019
S