For the ancient native Americans, the PINK MOON heralded the blooming of the first spring flowers: the 'pink moss'. For us, it heralds the blossoming of the second GODHOOD FULL MOON UPDATE!

As Godhood has been progressing nicely, we have found this to be the perfect time to go from the Alpha stages of development and testing into Beta!
A true moment of, frankly arbitrary, celebration!

The Pink Moon Beta Build has just been released into the hands of our testers, including any of you which backed at the Chieftain Level or above!

The Beta will last until Wednesday 24 10:00AM CET. If you have access to the build, we'd love it if you could help us out by testing it and giving us your feedback on our community forums!

We will stream gameplay of the new beta build tonight (17th)! 7PM CEST / 11AM PDT
Come join the chat over on our Twitch Channel as we check out the new features introduced in this new Beta build!

Subscribe to get an update when we go live!

We've already covered several new features in previous updates, but let's look at what else this PINK MOON has to offer us!

Probably the biggest development of Godhood is a big overhaul to the game's economy. What this means is: which resources do you collect and what can they be spent to do?

PREVIOUSLY: You would go on a Mission on the World Map to collect resources and worshippers.
Resources would be spent to Inspire disciples to perform Rituals, developing their abilities so they could go out to the World Map to collect even more resources.
Worshippers would increase your God Level, unlocking new rituals and abilities with which to develop disciples further.

We found that this loop made it difficult and uninteresting to plan your strategy: simply going anywhere would allow you to collect more resources and progress.
It also meant the game was filled with half-filled progress bars, which wasn't very satisfying.

We got to fixing it.

NOW: The Rituals you may inspire your disciples to do now come in two varieties: Productive Rituals and Miraculous Rituals. 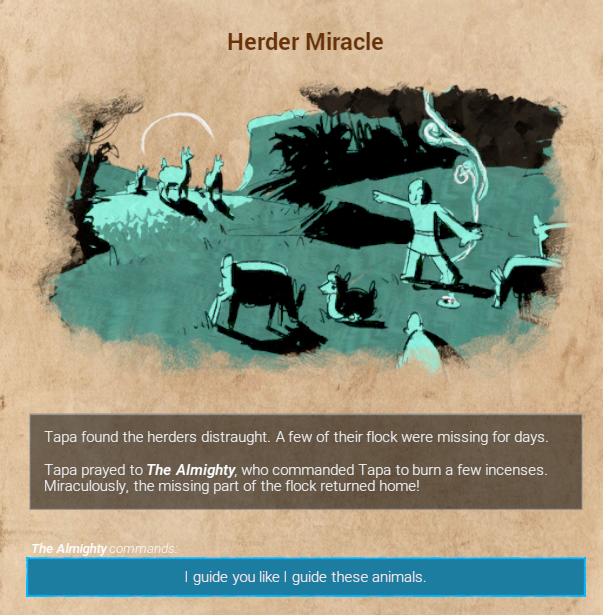 Since resources are now generated through Productive Rituals, the World Map now holds many more tantalizing, specific rewards:
Skyshards are a new resource which can be used to teach your disciples abilities.
New Rituals are now acquired on the map, instead of by leveling up.
Inspirations are a generic resource spent to Inspire disciples to perform rituals and power your divine little engine.
Worshippers still allow you to level up.

By placing very specific rewards on the map, we aim to push the game into a place where you have distinct needs during play ("I require skyshards to level up this disciple"), which you can then plan to obtain ("I will convert the skypriests to the east and get some!").
Ultimately this also allows you to spend more time in your Holy Site, watching your little worshippers perform their daily routines and act on your inspirations (we Love this).

God Levels are now much more difficult to obtain but also much more impactful when you do.

Rather than approaching this as a traditional levelling mechanic made famous by RPG's, we are going to be taking an approach more akin to a research tree system: each time you level up your God you get to make a decision about your next development.
Once you reach the next level, that development will be reached and you will reap the rewards of your earlier decision (followed by deciding what you'd like to obtain next God Level!).

Gaining in God Levels now takes much more time, effort and hundreds of worshippers to achieve.
The rewards, however, will shift your religion radically through new God Commandments or Religious Styles.

Three new classes are added to the roster, which brings the total up to 5 (out of the 10 planned for full release)!
This also means all 5 elements are now represented in the game, ready for your rock-paper-scissoring.

And there's more coming! We promised a podcast discussing the Early Access, which we'll be releasing on next week's update. Look forward to it!

But for now, allow me to step away from this keyboard, catch my breath, and prepare the Godhood Gameplay Stream for later today!
I hope to see you in chat as we walk through all the cool new stuff from this update.

See you next week for our usual weekly update, young gods! Spread the good word and remember:
if your prayer's not answered you should probably sacrifice a larger dairy animal!