Ah, the strawberry moon. The Anglo-Saxons of old had the good sense to name it the 'mead moon' instead, which has my personal preference.
But I'm sure you'd prefer a FULL MOON UPDATE to my trivia!

The last and final beta is upon us, young gods!
If you signed up to be an alpha/beta tester or backed at a level of Chieftain or above, you will have already received an e-mail granting you access to the new beta build.
We really love seeing your feedback, so if you have access consider playing the game!

We will stream gameplay of the new beta build tonight (12th)! 7PM CEST / 11AM PDT
Come join the chat over on our Twitch Channel as we play the game for an hour or so. We'll be checking out the new Chastity commandment, most likely!

Come hang out with Rick and Joni in chat!

In addition to creating a bunch of new gameplay content, now that all the different parts of Godhood have been coming together we've been playing with different ways of putting these together, like some kind of videogame-shaped rubik's cube. Let's get puzzling!

We've introduced a basic flow to the start of the game that gradually introduces cool stuff you can do over time.
For example, the first time one of your Disciples has gained enough XP to perform a Miracle, you'll be instructed to construct your first Miracle Ritual.

This might seem like a small point of progress, but it makes all the difference in getting to know Godhood during your first games.

We've introduced one more Commandment: Chastity! Pick this Commandment to put a focus on physical & spiritual purity. You'll be doing so with a unique disciple class, the Ascetic, who can shame opponents and eliminate their speech abilities. Chastity religions will also be able to perform baptisms and gain the use of a bathhouse.

We've overhauled the way you develop your disciples. For one, new acolytes you gain come with random stats and potential. Some disciples will start out weak, but have the ability to learn many more abilities than the average disciple. This is now clearly shown in an acolytes' Sign, which clearly states their quality level and the bonuses the acolyte gets.

In addition, we've automated disciple leveling. Depending on your disciples' potential growth and tendencies they will learn different abilities as they level up. This way, you'll have to make more interesting decisions about which acolytes to pick up and develop into powerful disciples! 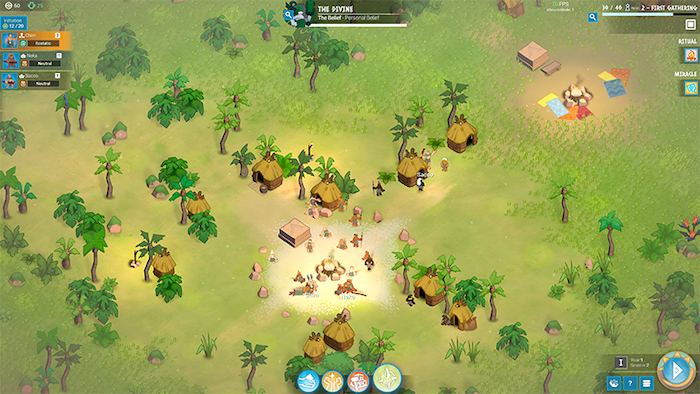 You'll notice the God Power buttons on the bottom of the screen!
We've been hard at work making sure that all ways to influence your holy site will be through these God Powers; from placing new buildings to inspiring Miracles.

Using the Inspire god power to Inspire a disciple

Our next release will be the Early Access release on July 10th. Here's what we'll be working on until then.
Things we'll get to during Early Access

There's a couple things we're not going to be able to get to before we launch in Early Access.
These will be things we design and develop during the EA period; hopefully with your input!

The late backing period has ended

Thanks to all of you that decided to late-back and help fund Godhood's development! If you're looking for more ways to help out, it'd be huge if you could wishlist Godhood on Steam. Thanks so much either way!

We're going to be diving back into the murky pool of videogame development, but before we fully submerge, be sure to catch the gameplay stream we're doing in a couple of hours over on our Twitch channel! It'll be the last one we do before a big EA launch stream July 10!