How to report technical issues

Game just froze while 'skipping' after assigning my disciples to a task in the village center. Music continued playing, but the game was not taking any input. Eventually, Windows decided that the process was unresponsive. My Meditation Circle finished building during skipping, so I suspect it has something to do with that. I've attached the log + screenshot.

Crashed (repeatedly) trying to create a new deity. Different names, customisations, commandments - it always seems to crash on creating a new world after the first one. (Even a fresh game does it)

Developer
Thanks for reporting! If found the crash in our crash reporter, will look into it

Blackvision said:
Crashed (repeatedly) trying to create a new deity. Different names, customisations, commandments - it always seems to crash on creating a new world after the first one. (Even a fresh game does it)
Click to expand...

Do you mean starting a new game after exiting to the main menu?

Nope, starting a new game at all after the first successful one (Which also now crashes everytime I try to go to a sacrament). I get through the deity creation screen and see the loading bar for the world, but then it crashes.

I have a suspicion it happens when it tries to autosave and you already have 5 autosaves, but I may be mistaken. About to test it by removing the saves (which does now work in-game!).

The New game after that has been working so far. (reached the sacrament)

Developer
Is is reproducible? As in, if you have five auto saves, does it crash again for you? (I ask because I haven't been able to reproduce it here). If that's the case, could you send me the auto saves (or your entire save folder)?

Yes, happens every time - if I have 5 auto saves and it tries to autosave again (like starting a new game or hitting continue or going to a sacrament does), things break instantly.

Here's the log again, I'll have to email the saves since it won't let me upload them (wrong file type it says?) here.

Can confirm for the latest version: most of my crashes went away after turning off cloud saves (Including the autosaves > 5 one, strangely)
Last edited: Apr 18, 2019

Had an issue (multiple crashlogs sent) where it CTD after returning from a Sacrament. The autosave from after the fight duplicated the issue everytime, but doing the fight over worked. Sending the save files as well.
P

Text isn't looking so great on my first install. Restarting didn't seem to fix it.

K, so Had a bunch of Crashes so far in .8.5 Submited the crash reports for them all but just wanted to let others know too.
First the little Mangifier in the top right with the diety name in the Mission selection screen doesnt give more info on anything yet, unless you wante to check out the marvel of the crash reporter kinda cool and easy way I suppose, saves all the other more obsure methods.
Second as far as I can tell Dancing performance is currently bugged, game keeps crashing when it gets triggered as a follow up ability with my songsmith, Tip dont do that yet. Currently stops her use now since the ancetrals love their dark attacks

Also give me a shout if you want anymore info Abbey, I can send through the saves if needed.

Edit: Also noticed a few graphical bugs with hair in the sacrement, guessing the animations arnt all finished yet.
Last edited: Apr 18, 2019 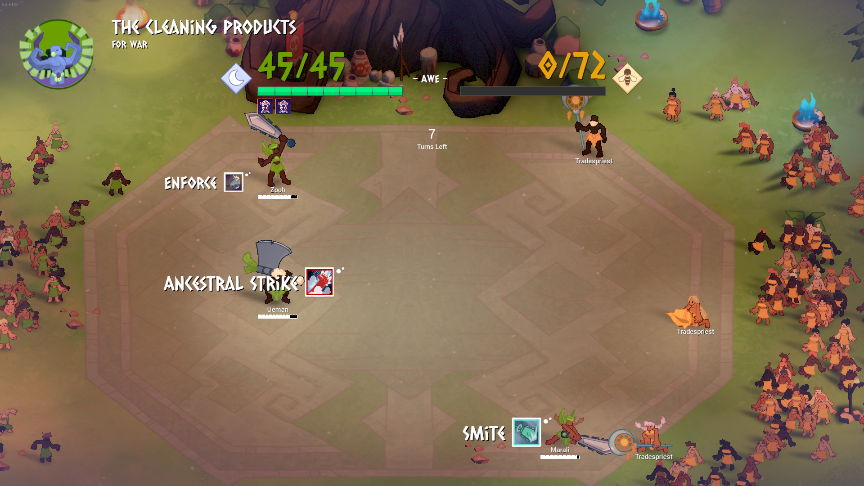 I chained so many attacks I killed them with my second character and the game broke. (It stopped doing anything, though all the music and animations are still going ahead, just nothing happening).

(Yes, sorry Adriaan, I did break your best attempts at balancing. And yes, Offence > Defence again.) And it won't let me attach the log file, so sending that by email.

It happened again the next time - it appears that linking together that many attacks causes issues
(First one used Greater Smite (the second time, the first time he used Smite), did 45 damage, second one used Ancestral, triggered Virtuous Sacrament on both Smites, and the killing blow was the second of those reactions.) The third disciple *had* been going to do Smite himself too.

In addition, Smiteswords for War that use Shadow of War not only trigger other Smitesword's Virtuous ability, but also their own, which I'm pretty sure they shouldn't. (They didn't seem to use the Dark trigger as well though, but it might have got lost after so many other triggers)

Actually, the above may just be if you socket some level 2+ abilities into a response (when it triggers) *see below*. It seems to break things generally. Tried with Smite, tried with War Shadow, tried with Greater Smite - all seem to cause issues. Not sure how much of it is due to other things though - I did notice War Shadow *did* trigger two separate response attacks from the Smiteswords I had there with both response attack upgrades - Dark triggers and War triggers) - not sure if it's the fact so many are triggering or if it's specifically using those abilities as responses.

Have sent savegames/logs to experiment with.
Last edited: Apr 19, 2019

New bug: Beastwalker's Evasive Claw passive triggers when enemies evade too. Very useful - if not more useful than your own team - at least you know someone will be trying to do physical attacks for a certainty on your team! But probably a bug, none the less (Would be totally fine with making it either side, by the way - it's crap only being able to use that passive on half the enemies in the game if they happen to be evaded (which even with stacked buffs, seems a pretty low chance).

Blackvision said:
Actually, the above may just be if you socket some level 2+ abilities into a response (when it triggers).
Click to expand...

Nope! I was wrong. Something's dodgy with the reaction abilities. There's definitely something that goes wrong if you fire a triggered ability and finish off the enemies with it. Not sure if it's when there's another triggered ability waiting to trigger afterwards or some other cause for it, but I get these hanging moments often with reactionary abilities finishing off the enemy. (Happened with a pair of Songsmiths using the level 3 passive that triggers a song if you're still over 50% HP after a pair of rounds.

I did also encounter this bug today and experimented with it. During my tests I came to the same conclusion.

Found one exception to the above bug: even if you have two stacked reaction abilities and the first one triggers the last blow in combat, it doesn't crash provided that it also knocks out all remaining enemies (eg. if one's still standing and it finishes them, that counts, as does having 2 standing and it finishes off both of their spirit bars with an AoE). Pretty extreme case, I know, but thought I'd mention it

Oh, and can also confirm that if the blow that triggers the additional attacks finishes it, the Sacrament still ends properly - it's only when it's the first triggered attack finishes their awe with another ready to follow it that it hangs. (So it's not just to do with the triggered skills waiting)
Last edited: Apr 21, 2019

Unable to change slotted passive skills when there's more than one:
For Songsmiths/Smiteswords, who can potentially get 2 passives that slot skills, you can only upgrade/change out one at any given time - whichever the last you gained was. Given that you're forced to level up immediately after doing so, this means that you may not get the opportunity to change your first one if you haven't finished switching it to the one you want - quite plausible, given the amount of exp you gain before you gain a lot of Sky Shards.
M

I've submitted multiple crash reports over the last two hours. The game consistently crashes on specific Sacrament missions (the one giving the Mystica generation miracle and the first Ancestor outpost). This happens in two different games, effectively ending them both.
You must log in or register to reply here.
Share:
Twitter Reddit Email
Menu
Log in
Register
Top