I had an opportunity to play the Newfound Shores 0.16.5-beta.1 patch and here’s my feedback. So far I have made three failed attempts in the new patch but I think it’s a huge improvement to the game overall. The pacing and the strategy seem to be coming together really nicely and there are some interesting changes that add to replay. Even though I lost, starting over and progressing isn't as tedious or repetitive.


Attempt 1
For my first attempt, I was confused by several aspects of the UI that I think could be better explained. This run failed because I didn’t understand some of the changes and I don’t think they were well documented and telegraphed.

Manage City Screen
I felt that this screen was initially overwhelming with a very large number of options available right away. I know what everything does for the most part but I still ended up missing some things and not prioritizing the most important upgrades. The +1 God Action should always be the first selection followed by the material gatherer building.

Skull Reward Screen
Even though I watched the stream where Adriaan presented this screen, I was still confused when I first encountered it. I wasn’t sure if the rewards required additional skulls or if there was some sort of opportunity cost for selecting a major reward. Allowing someone to select a lesser reward seems pointless and superfluous. This issue seems to resolve itself on later islands with greater reward diversity but the following screenshot shows a Minor reward that should never be selected. 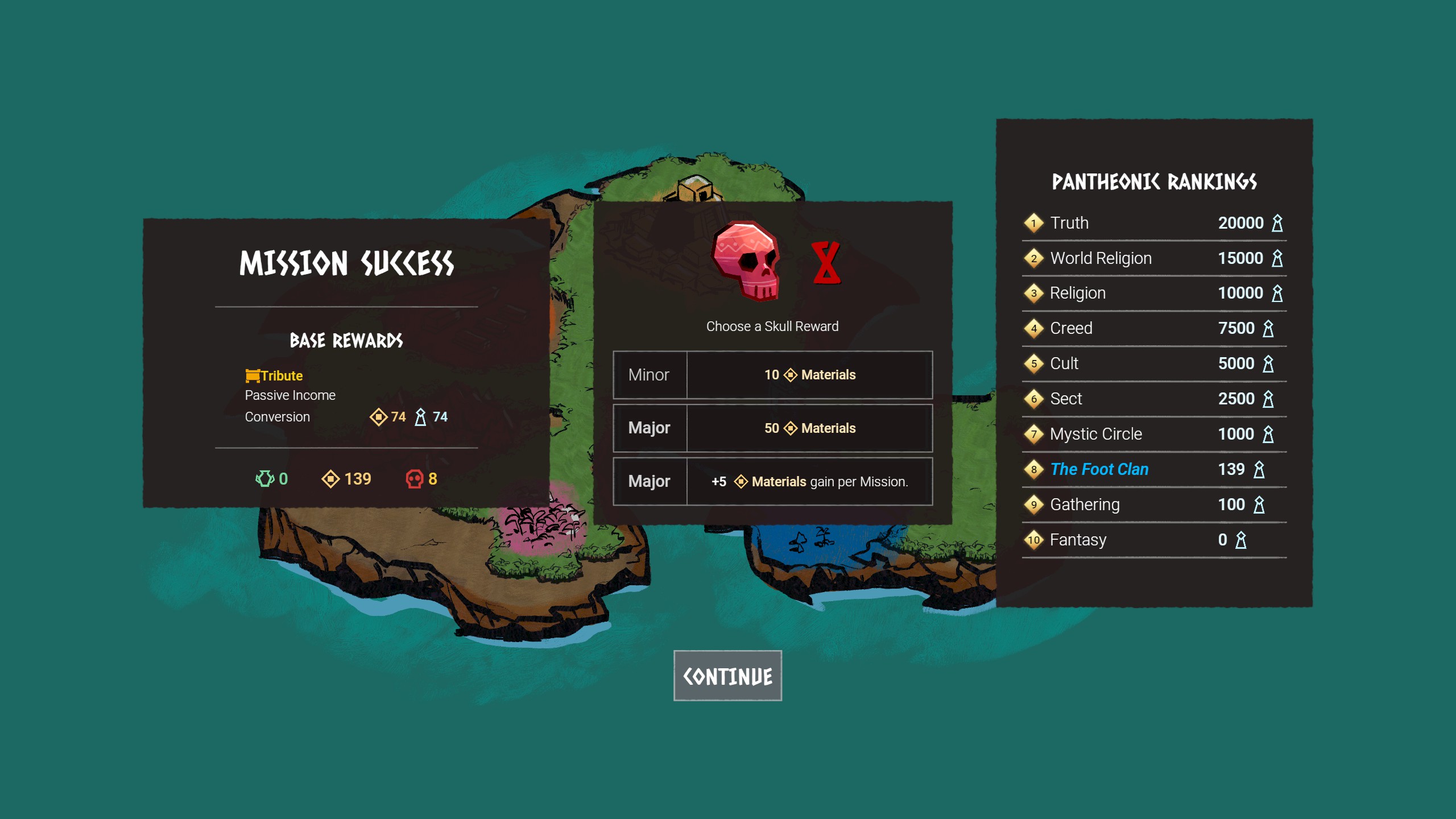 Tutorial
Overall, I think the tutorial could be improved. Instead of presenting a large block of text at the beginning, you could pace things out by showing one mechanic at a time. Modern tutorials presented by Google and Microsoft revolve around text overlays that highlight one button and lead players through menus. I think the tutorial could be split up in multiple phases with information presented on overlays as a feature becomes relevant.


Attempt 2
My second attempt ended after making a poor strategic decision by upgrading an Acolyte to the wrong class needed for the next sacrament. I picked a sacrament and then was locked into that choice of planning for an unwinnable confrontation.

Gameplay Pacing
One of the issues I had with the previous version of the game was how you would make a decision that wouldn’t be realized for several turns and being unable to anticipate and react to changes in strategy. This has been improved by making you select a development after you earn enough sparks. The other aspect was selecting your next sacrament and I like how you can now select the sacrament and then plan for it. This improves the gameplay loop and pacing overall but it still leaves you stuck with being unable to react if something changes with your roster. Sometimes you realize that you need another miracle or a disciple prays not to be part of a sacrament.

I like how you select your sacrament before going into the city but I would like the ability to change to a different sacrament in the middle of planning. This prevents a railroading effect in the event of something unexpected. I don't think this interferes with planning but allows you to react and change course if necessary.


Attempt 3
On my third attempt, I ran into a major bug and ended up in an unwinnable scenario. I like the Human Sacrifice development and I ended up making a War religion because of the apparent synergy. Unfortunately, after selecting Human Sacrifice, I was unable to navigate to the War tree which prevented me from selecting any War developments. This is demonstrated in the screenshot below with no icon to select War. 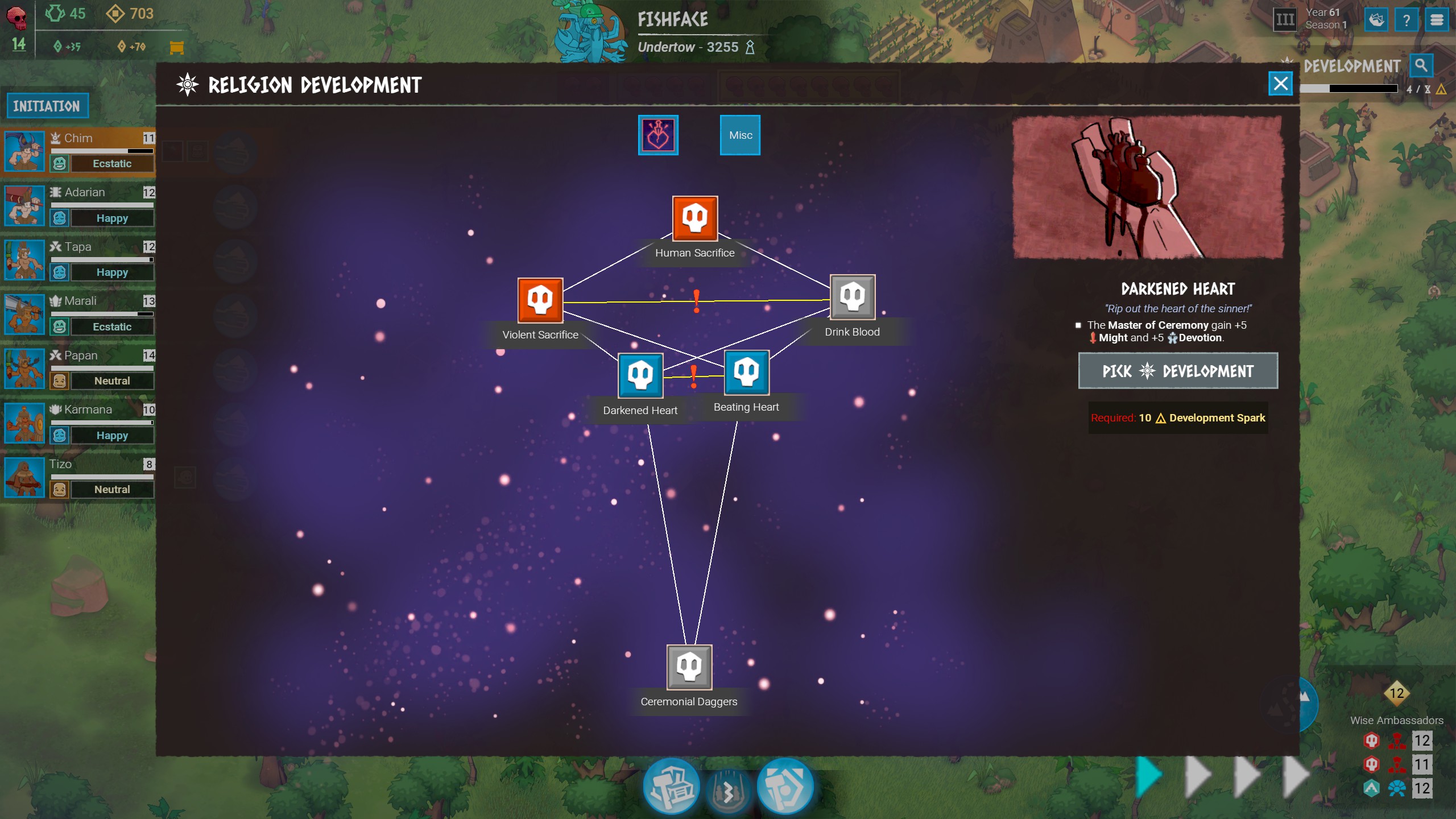 Sacrament Variety
I encountered several sacraments that had what I think are unique properties that really improve the variety and tactics. This is a very nice improvement but I ended up hitting a brick wall with an very difficult challenge. I’m not sure if it’s intentional or just bad luck but the Forbid Violence passive is almost impossible to overcome with a war religion.

Agreed about the UI, I was also pretty confused at first and there are still elements on which I'm unclear after two "full" (i.e. locked by a bug after a few islands) playthroughs. First of all being the followers, whose use beyond unlocking buildings is still escaping me - which means I literally never select the option to gain them if I have a choice. Some UI elements also still mention "AP" (Awe Points), eventhough I'm pretty sure that mechanic doesn't exist at all anymore. Also the Songsmith still has a passive that gives you +25% Awe Points, which I assume does literally nothing now.

I’m not sure if it’s intentional or just bad luck but the Forbid Violence passive is almost impossible to overcome with a war religion.
Click to expand...

War used to be the strongest path imo, but the new system seems to have made it among the weakest. I didn't encounter this passive in my War playthrough, but I did lose several sacraments (including on the first island!) because morale is just infinitely better. But more to the point: yes some of the special enemy passives are interesting but others seem to be more along the lines of "Oh you built your party around this mechanic that your commandment is good at? Too bad, so sad, this enemy is essentially immune to it" and it can be very frustrating.