Well, I've been playing - or at least bought - the game since the first Early Access version. After playing it with this new update, I feel that finally you're delivering the game you set out to create. This is the Godhood I expected when I first bought it. Congratulations on finally presenting a complete (yet still lacking a bit of content) game.

I have, however, some feedback on things that need to be changed:

1) Morale feels WAY stronger than physical attacks. Did 2 full playthrougths, one with a physical-heavy Madness (chaos/animism) god, and one with a morale-heavy Generosity (community/funeral rites) god. While I was able to win at both in Classical dificulty, the physical game was very hard and I had to struggle a lot to win, while the morale game was a breeze and I don't think I lost even a single Sacrament. I will try a War game next to see how it shapes up.

EDIT 2: Just noticed one thing while in my War playthrough. Cunning, a mostly physical attribute, increases initiative (which is most important for morale attackers) and Knowledge, a mostly morale attribute, increases chance to hit the weakest enemy (which is most important for physical attackers). Since you need to focus fire to break opponents, I think these roles might be swapped, with Cunning deciding who to hit and Knowledge increasing initiative. This should be an interesting buff for physical attackers that might bridge the morale-physical gap.

2) There is a problem with the conversion graphics when the characters are broken. The conversion bar just looks awful while retreating, and it is only fixed at the final of the round. It might be a graphical bug in my machine, or it might be a general thing.

3) There are lots of broken tooltips. Some (IIRC the level 4 songsmith passive) still talk about AWE points, while others have wrong text/reference wrong abilities (the Generosity unique passive increases evade chance, but the tooltip on the menu you pick it says it gives you chance to follow up nature attacks).

EDIT 3: Here's cannibalism (whose tooltip says it procs on Ancestral abilities) proccing on a Divine attack: 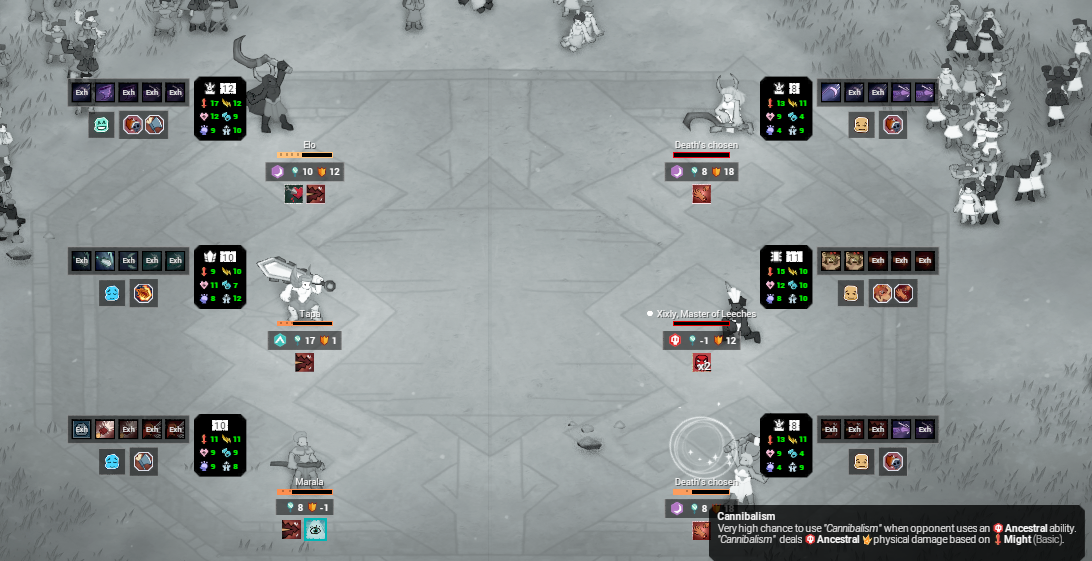 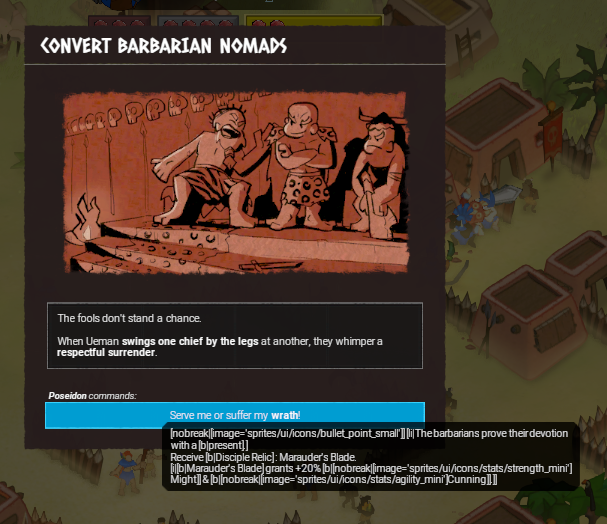 4) The Sun temple is really strong, giving you lots of ability points (especially with Generosity's double yield). Maybe having it take time to complete (like a miracle does) balances it out better? It was relatively cheap (and easy) to make uber characters with lots of ability points (to the point my weaver was sporting 2 level 3s and 4 level 2s).

5) Dreams are an awesome addition to the game, but Rituals feels VERY underwhelming. Its hard to sell a +1 in one stat for 20 offerings when you could be getting another ability point for 25 offerings or even +faith, +25% offense and +10 defense for one challenge (which may be more than 1 singular sacrament). I know the stat gain is permanent, but a single stat point does so little (just to compare, a miracle gives you around 13 stat points, and thats with a unupgraded non-wondrous version of a basic miracle!) that rituals feels just "meh".

6) Might and Charisma feels weak in comparison to other stats. I know they raise physical and morale hitrate, but when you got classes that hit with things other than that (hitting with knowledge and cunning is specially nasty), they just fall in the sidelines. I suggest having a minor (or basic, can't remember which one is the lowest) Might scaling on ALL physical attacks and a minor Charisma scaling on ALL morale attacks (in addition to normal scaling), so they always feel like contributing something on the damage side.

7) Where are the group physical attacks? Morale got 2 classes doing that (songsmith and chieftain) but physical lacks it. I suggest that the Rage Prophet and either the Beast Master or the Dark physical class (Harbinger) could get one sweeping physical attack each.

8) The graphics for the developments are just... ugly. I know there is a way out there you can present that information better. Paradox Interactive's Hearts of Iron 4 has a "Focus Tree" mechanic that looks much like your developments, so they can be a inspiration for the UI. I'm talking about the actual menu and the arrangment of the icons, not the graphics on the actual development blurbs.

9) 0 HP disciples do not get broken. You need to lower them to -1 HP to break them, as shown here:

Well, just created this account to say 2 or 3 things and already thing I've overstayed my welcome I'll keep playing and commenting here whenever I have more feedback to say. Keep on the great work and good luck! 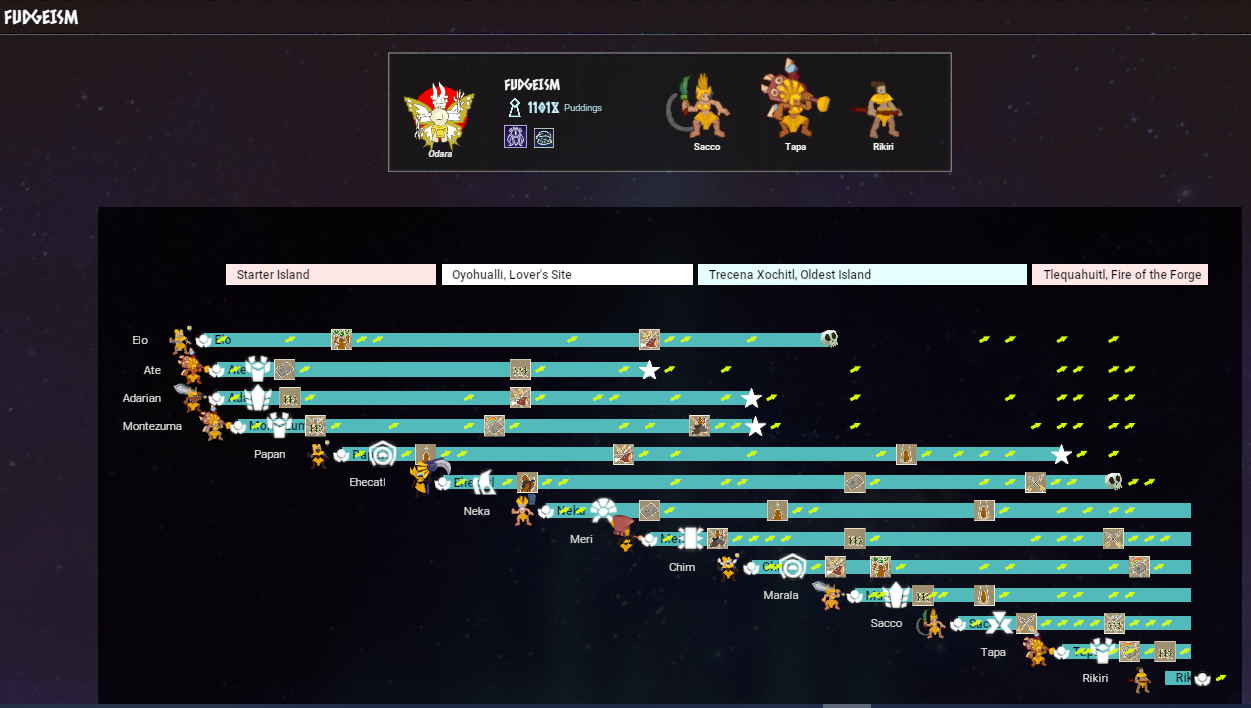 EDIT 5 (and final): Just finished my War playthrough. It was a breeze past the first island, mostly because I think I mastered the strategies to GIT GUD. However, my point still stands with physical being a little weaker, because I still had much more troubles in the first island with physical, while morale teams were much easier. However, once you get things going with enough buffs to XP, your temple and top level acolytes, you cruise through the sacraments.
Last edited: Mar 1, 2020

Yeeeah! Thanks for all that juicy yummy feedback!

I fixed all the things I could here. One note:

" Might and Charisma feels weak in comparison to other stats. I know they raise physical and morale hitrate, but when you got classes that hit with things other than that (hitting with knowledge and cunning is specially nasty), they just fall in the sidelines. I suggest having a minor (or basic, can't remember which one is the lowest) Might scaling on ALL physical attacks and a minor Charisma scaling on ALL morale attacks (in addition to normal scaling), so they always feel like contributing something on the damage side. "

That already is the case . Might scales up all your base damage for physical, charisma for your morale. I'll see if I can improve the tooltip!

I thought the cunning/knowledge idea interesting! I will think about it!