Be sure to leave all your reports of typos, spelling errors and other language errors in this thread!
Thanks in advance,

- see pic "3.jpg", something went wrong at the tooltip for the passive "divine surge" of the Guardian

- see pic "7.jpg", the Ability window for the Guardian has the Shield Bash Abilities at the bottom all (so Level 1, 2 & 3) with the wrong text "disciple.faction.godName"

Hi, got two for you

fig "Typo1.jpg" : when performing the peace envoy miracle the pop-up (for both options!) says per cd.charisma

See the very last line of the tooltip in this image.

While playing in french, well, some content like "Talent" and perks aren't showing properly when I point my mouse on Totem description like I'm showing in the screenshot I just sent.

The Dark Guardian Passive description has a typo. 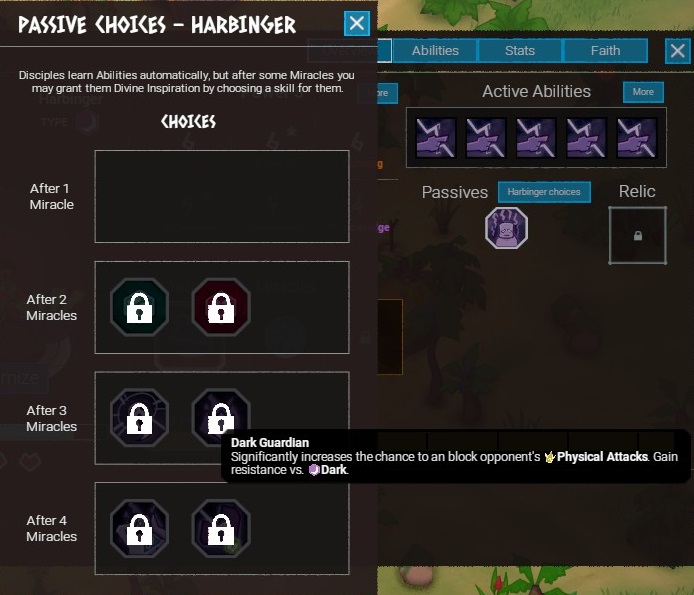 Be sure to leave all your reports of typos, spelling errors and other language errors in this thread!
Thanks in advance,

Hello,
Here are some typos I noticed in the current Live version (1.0.6):
Description of one of the Level 5 Islands: "inhibited by Demon Worshipers" => inhabited and worshipper (there are also a few enemies that are erroneously called "Worshiper" instead of "Worshipper")
Before a sacrament: "Only a few are more developped then they are" => than
Description of the last island: "Disciple knows that the final trial await them" => awaits
Description of the Silence ability: "and lowers disables 2 morale abilities" => the "lowers" should probably be removed, I assume this ability was changed at one point from lowering some stat to what it is currently
In the victory screen as Madness: "Reaility bends to your madness" => Reality
Also, the "Chastity" and "Chastity+" achievements should probably be renamed now that the commandment is "Purity". They still work, but it could be a bit confusing for someone picking up the game now.
The Cultist class' description still mentions "Weird" abilities that are not a thing anymore as far as I know, and refers to the old "Unchain" passive that has been replaced by others although I suppose that part is vague enough that it could remain.
Description of the "Ce Ollin, The Movement" island: "Disciple heard about the reformed cult of a lust goddess than want to be cleaned of sins" => that wants
Last edited: Aug 16, 2020
A

Short for typographical error, a typo is a mistake made in typed or printed text. Some quick examples are spelling occurrence with one 'c' or 'r,' or spelling 'receive' as 'recieve. ' Even if you are an expert in the 'i before e except after c rule,' it's easy to type a word as common as 'sceince' incorrectly.
You must log in or register to reply here.
Share:
Twitter Reddit Email
Menu
Log in
Register
Top