It's been a little bit! Kickstarter-fever is starting to wind down here at the Abbey, as we patiently wait (read: eagerly develop Godhood) while Kickstarter processes the funding you graciously chose to support us with. In the meantime let's use this first weekly update to take a look at how Godhood's shaping up!
Remember, we will get back to backers regarding the fulfillment of rewards (including keys to Reus & Renowned Explorers) as soon as Kickstarter is done processing the campaign funds, which could still take another week and a half or so.

​
We'd like to let you know that late backing options are now available over at godhoodgame.com. Be sure to spread that good word with anyone you think could be interested; late backing is available up until the Early Access and can still unlock the Stretch Goal.
Options are available for the €25, €40 and €80 pledges.

The next monthly full moon update will be on March 20th. We'll release a new Alpha build to our testers, and do a gameplay stream of said build so we can catch you up on development and show off new features!

Gearing up for Alpha
We are hard at work to get Godhood into shape for the next alpha moment! For this we are building a number of new features and content we'd really like to get our alpha tester's insight on. Let's look at some of these things!

Making the map more beautiful
If you'll have seen any of the gameplay streams, you saw a black void surrounding the holy temple grounds. Visual programmers Daniël and Maarten are hard at work turning these black voids into an awesome vista! 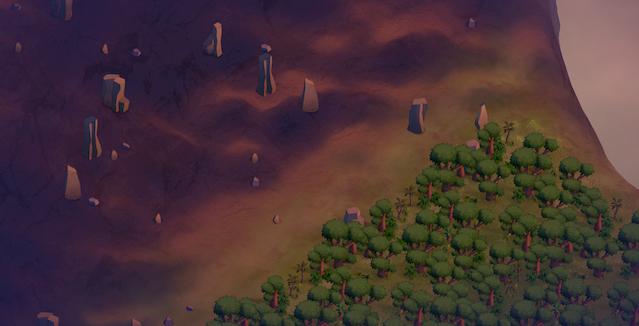 The other side will feature a mountainface (quite WIP also)​

Times of day will cast your holy site in a very different light​
Game Modes & End of the Game
We are experimenting with two different game modes, their goals and their endings. These two modes of play are:
Story Mode allows you to take your time to experience your godhood and experiment with your religion. In this mode you will be challenged to defeat the other deities and the proud tribes that worship them so you may claim the title of supreme god. In this play-through there will no doubt be set-backs and failures, but you will have all the time you need to adapt your strategy and level up to defeat the challenge and continue down your path.
The game world map and the deities that populate your map will be generated each time you play the game, so no two play-throughs of Story Mode will be exactly the same.

Challenge Mode will challenge you to create a lasting religion before the time of myth comes to an end. You will be challenged to gain the most worshippers, defeat the most adversary deities and spread your religion to as much of the map as you can manage within a set time-frame. There will still be narrative beats involving the other deities, but every challenge you face will have the opportunity to hurt your god's greatness.
At the end of the game, you will take up your rightful place as one of the heavenly bodies of the mythical world of Godhood. Do you have what it takes to become the sun itself!?

Both these modes are currently in very alpha versions of initial testing, but we're really excited about offering different experiences of Godhood for different players or those that like to vary their playstyle.

Reworking the User Interface
If you've seen any of the gameplay streams, you'll remember me saying over and over that the UI's were very work in progress. Well, I can now breathe a sigh of relief because the UI's are being revamped! 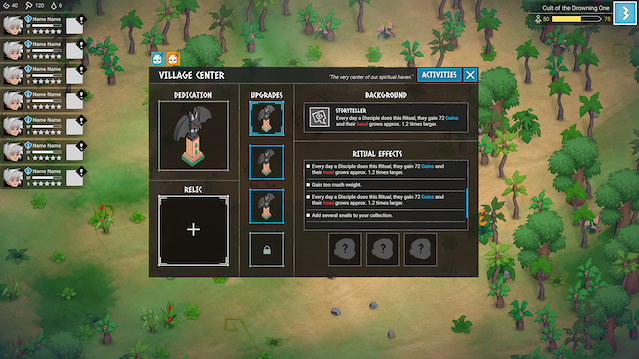 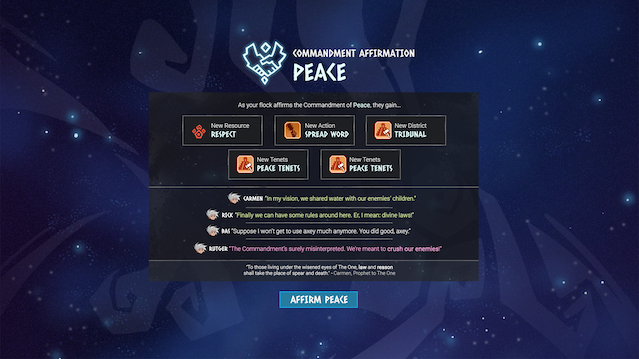 When you gain a God Commandment, your Disciples will no doubt have opinions...​
And much more!
New music, animations, buildings, classes, stories, and gameplay systems are all coming together for the next Alpha build! While everything is of course incredibly work in progress (and will be for the Alpha as well) we're really happy with the direction Godhood is going.

See you next week for another weekly Godhood update! And don't forget to spread the good word!

- Rick
(this post was originally posted as a Kickstarter update by Rick,
-Joni)

Looking sweet guys, keep up the good work. looking forward to some time off around the end of the month, (hopefully I get some :/)
You must log in or register to reply here.
Share:
Twitter Reddit Email
Menu
Log in
Register
Top